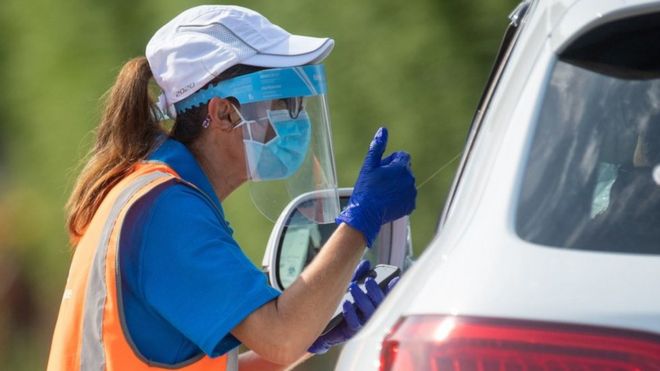 Schools are back, businesses are reopening and winter bugs are starting to spread - meaning more and more people
are asking for a coronavirus test. Three families explain how the testing problems are affecting them.

'I'd drive 100 miles'
Maria Aziz, from west London, has been trying to book a test since Sunday, when her nine-year-old daughter, Mishal,
complained of a sore throat. By 04:00 Monday, her daughter had developed a fever.

"I had been trying all of Sunday to try and get a test. I must have tried between seven and ten times," she told
the BBC. "And then yesterday I probably tried about four times at various intervals across the day, starting early in
the morning and ending late at night."

After again trying and failing to book a test today, she said she's frustrated. Her eldest daughter, Eimann, 14,
has also had to be withdrawn from school while she tries to book a test for her younger daughter.

"Even if I have to drive 100 miles to get a test, I'd rather get her tested than not have a test," she said. "If she has it,
then that's fine. We will know we need to continue self-isolating. But if she doesn't then it's unfair on my older
daughter. She's missed enough school already.

"I'm trying through the government website and then yesterday there was also a number on the website to call - 119 -
so I tried that as well. Each time there were no tests available. No home kits. No walk-in slots. No drive-through
slots. Nothing.

"It's very frustrating. They've just about managed a week of school before they've had to be off again. It would be
good to know one way or the other."

'We'll have to close our cafe'
Scott Vining's daughter fell ill with a temperature on Saturday. By Sunday, the rest of the family, who live near
Dunstable, in Bedfordshire, had also developed symptoms.

"We've tried hundreds of times," he told the BBC about trying to book a test. "We started to try and book tests for
my daughter on Sunday, to no avail, and then we started at 08:00 on Monday morning for us all."

At one point Scott was offered a test in Warwickshire, 65 miles away from his home, through the government website.
But by the time he'd entered the details of his family of four, the spaces had disappeared.

"This is the problem I've found," he said. "When you're doing it for a family of four, either no tests were available at all
or after a while it kept taking you right back to the start to put all your details in again.

"In the end, I just put my wife's details in because she's the most important one to get back to work."

Scott managed to secure a test for his wife today in Luton. He has since managed to book tests for himself and his
children at a separate testing centre, in Bedford.

'We can't all get tested'
For larger families, it's not just testing availability that can be an issue. "It's an absolute nightmare trying to navigate
the website as a family of eight," Christina Fox, from Stockton on Tees, said.

"You can only order four tests at one time at the most anyway. So even if we'd been able to get four tests in the first
instance, we would still have struggled to get four more on another occasion. Large families are really not thought
about in this situation at all."

The family was advised to book tests after phoning 111 when Christina's seven-year-old daughter developed a high
fever and a cough.

Return to “Your first forum”